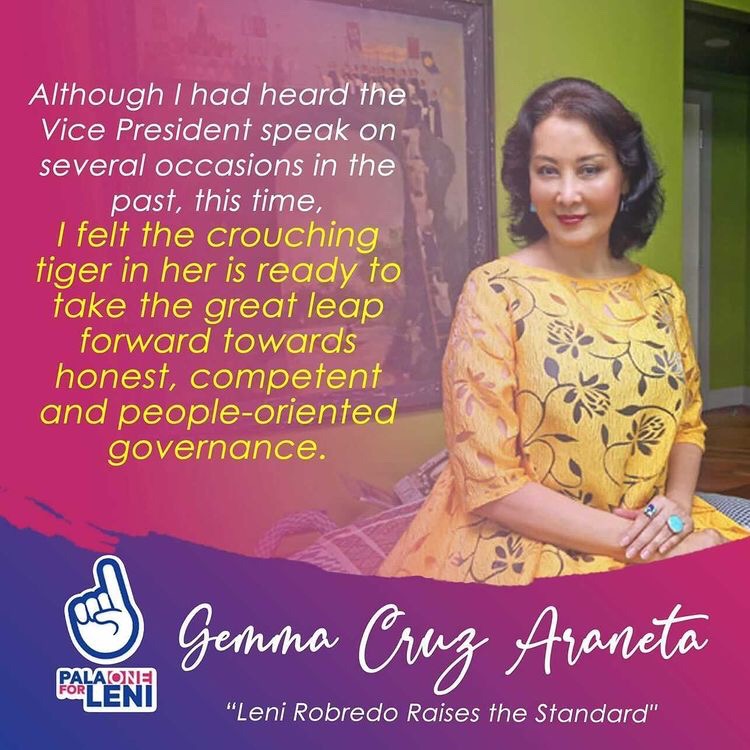 Vice -president Leni Robredo has raised the standard of political discourse in this country. That was evident in the acuity of her speech (in Tagalog) announcing that she will run (sasabak ako!)  for president in the elections of 2022.  I viewed it on YouTube so I could replay sections which I found particularly inspiring. Although I had heard the Vice-President speak on several occasions in the past, this time, I felt the crouching tiger in her is ready to take the great leap forward towards honest, competent and people-oriented governance.

Listening to Leni Robredo has always been reassuring and refreshing.  Here is a VP so rudely dismissed by the Chief Executive,  but who has not lost breeding nor bearings.

She made the rounds, conferring with “different personalities” (iba’t ibang personalidad) in the political field. It must have felt like dancing with wolves. She offered to step aside, or to help them instead, if need be.  The grifters were relieved; others offered her high government positions should they win. She had to explain that her conferring with them was not about securing endorsements nor future positions; it was not transactional. Her aim is to establish unity of purpose so the country could follow a clear direction. No other politician of recent memory has done that. It makes a lot of sense for all aspirants, especially those running for the highest elective position, to be united about basic principles and to agree on the “landas sa kinabukasan” (road to the country’s future). For instance, they should agree that it is imperative to mitigate the devastating effects of the Covid pandemic on health workers, hospitals, on millions of unemployed and hungry Filipinos, ”while millions of pesos are spent on questionable contracts.”

VP Leni said we should once and for all eliminate (iwaksi) corruption, incompetence in government, lack of concern (walang malasakit) and personal interests and agenda. We should get rid of “mga tao at klaseng politiko” who are the cause of what we are going through now.  She added, “If we cannot draw clear lines, if you compromise, if you cannot say that wrong is wrong, on whose side, are you?  Although we come from different situations (contexto) we are all familiar with what the Filipinos living in the fringes (laylayan) of society are suffering.  They are desperately shouting for help, knocking on all doors. “

Then Leni compared the plight of Filipinos to the “battered woman syndrome”, which gives us a clearer picture of what is going on. When she was a practicing lawyer in her province, most of her clients were victims of domestic violence. Whenever she asked why they tolerated abusive husbands or lovers they would all say it was for the sake of their children. Leni would then explain why that was a bad idea, the children would only inherit their suffering. Eventually, many of those women found the courage to pack up and leave their tormentors, with children in tow. “Love is not measured by suffering, Leni affirmed, but by fighting back to end the pain of those you love. We have to liberate ourselves from the current situation. I will fight!” she declared, “Together we will fight!… They may have all the money, the power, organizations to churn out false narratives, but the truth cannot be muffled by their noise. “

“It is not a matter of changing the surnames in office, if the same kind of people and same kind of system win in 2022, we cannot hope for change. We must defeat the old and rotten type of politics and give back to the common Filipino the capacity to bring about change. Let us awaken their inner strength from deep slumber. Rise and you will see others rising with you…” She reminded us all that despite the obstacles placed her way by the present dispensation, the VP’s office accomplished myriad programs to uplift marginalized Filipinos.

There was a brief press conference after the speech and someone asked what VP Leni and Manila Mayor Isko Moreno talked about. She demurred; out of respect, she will not reveal the details of meetings “with different personalities”.  I am shocked at the solecism of the Mayor of Manila. He mocked VP Leni’s proposal of unifying not for unity’s sake but for the common good. Retorted the Mayor, “How can she dare speak of unity when she can’t even unite with her party (the Liberals)?”  This young man misses the point.

VP Leni is banned from attending Cabinet meetings. She was relegated to being a side show.  But, when she announced her resolve to fight and run for President of the Philippines, VP Leni suddenly took center stage, from where she will continue raising the bar of political discourse.