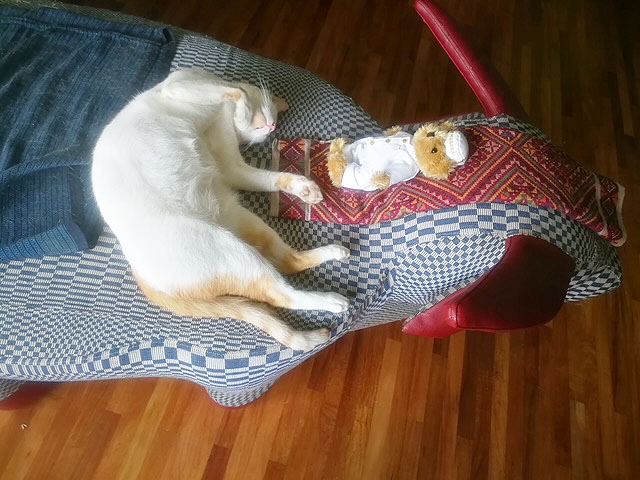 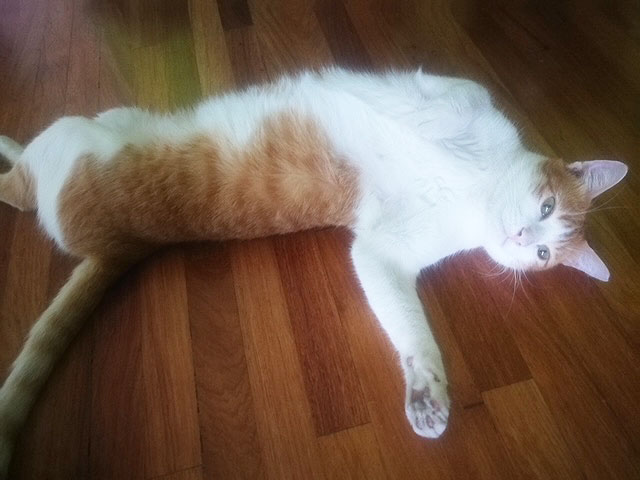 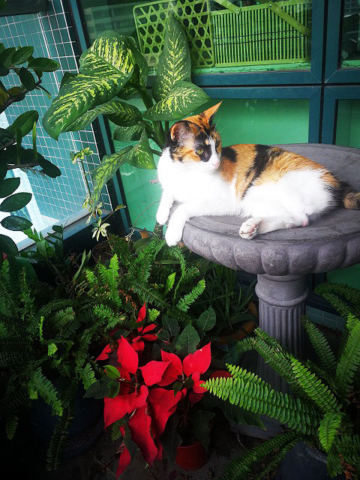 Milonga attracts a lot of attention because her bold markings of orange and black cover her entire back; she looks like an abstract painting when she is asleep, slender body stretched out on a window sill. Once, while waiting for our turn at the vet, a woman (who was also cradling a cat) approached us and told me that I should shower Milonga with loving care because tri-colored cats like her bring good luck. She is indeed a gift from the Creator.

Milonga is a rescued feline, a “puspin” or pusang pinoy, a native cat of no special lineage. Five years ago, my niece found a cluster of kittens at the parking area of the building where she lives. The mother cat had died in an accident, said the security guards, leaving an orphaned brood– a tortoise cat, two tuxedos and a calico. My niece said the calico kitten was mine. We did not notice that it was disabled, a hind leg had been cut but healed. Maybe she was a breech kitten and her mother had accidently bit off half a hind leg while pulling her through the birth canal. I felt it would augur well to name her after a dance, Milonga.

After a year, I felt that Milonga needed the company of another puspin, although she showed her human (that’s me) a lot of affection.  She was not actively playful, probably because of her disability, but she loved to clamber up my leg while I was reading and curled herself into a ball on my lap. She appropriated a corner of my bed where she would sleep day and night. I asked my youngest granddaughter, also a cat lover and rescuer, to take me to the cat shelters in Makati from where she had adopted some pets. We made the rounds and I found a sprightly male kitten in a shelter owned by a long- lost friend, Nancy Howell, who was one of Manila’s top fashion models in the 1960’s. All her feline wards are spayed and/or neutered, live in clean cages and are well fed. None are for sale, but donations are always appreciated. I chose a slender butter ball, striped like a yellow tiger with a tuff of white on its back. As I approached the cages, he ran to the four corners of his enclosure, meowing his loudest to catch my attention. I named him Jarocho, a type of music and dance from Veracruz, Mexico. Nancy lent me the cat cage for a couple of weeks until Milonga and Jarocho stopped growling at each other and became friends. Jarocho has turned out to be a felicitous choice.

Just when Milonga, Jarocho and I were scurrying towards a placid life by the Pasig river, I had to adopt a third puspin, another male, so the acquaintance period was a stormy one. He was spotted roaming around the embassy of Saudi Arabia and rescued by the same granddaughter who had taken me to Nancy’s cat shelter. The guards would have beaten him to death, she gasped, but she named him Arabia just the same. After a year, my son asked me to adopt him because they were moving to another house and had too many cats already. How could I refuse? I renamed Arabia after another dance, Merengue; he happens to be all white, except for a tuff of yellow on his back and his striped yellow tail. Although he is younger than Milonga and Jarocho, Merengue is big-boned and muscular, esurient and cunning, yet he is as sweet as his name, purrs like a harmonica and comes running when I call.

The sustaining myth about cats is that they are aloof, unfriendly, unkind, selfish, dirty, prone to predatory gawking, destructive and treacherous. They submit to no authority and are nice only when they want to be fed. They are a bag of need. I dare say that is black propaganda because once cats perceive your good side, they reciprocate and show you how affectionate, communicative and loyal they can be.

Milonga, Jarocho and Merengue each have their own personality, who knows if their behavior is genetic or molded by their living conditions, or a combination of both. Zoologists say that domestic cats have not lost the instincts of their wilder ancestors; they need space to run and leap, they are prowlers and predators. Those traits are more evident in Merengue who loves to jump to the highest bookshelves with perfect calculation, never once falling short. For no apparent reason, he sometimes goes gonzo, dashing up and down the corridor connecting the dining room to my dressing room, squeezing through cat doors with energetic grace. During feeding time, he gobbles his food and steals from Milonga and Jarocho when I am not looking.

Jarocho and Merengue butt heads. They have their regular “Mexican stand-offs” when they glare at each other, muscles hardened in battle position, coats bristled, tails puffed up, growling in retardando. When they hear my authoritative and menacing, “No fighting! No fighting!” they break up and take cover. From a distance, Milonga watches them with ladylike indifference.

Milonga is the designated “spokescat”. When I am too engrossed in my work to prepare their meals, she comes, sits beside my leg, looks up meaningfully. She mews politely. When I do not notice, she taps my foot with a padded paw, if that does not work, she waits a while then bites my leg, gently, but her sharp teeth hurt so I get the message.

My cats treat me in an avuncular manner; they communicate, empathize, display fondness, keep me company. I feel they are ready to frighten with claws and fangs any stranger who dares cross our threshold. They might also jump into my grave when I die.